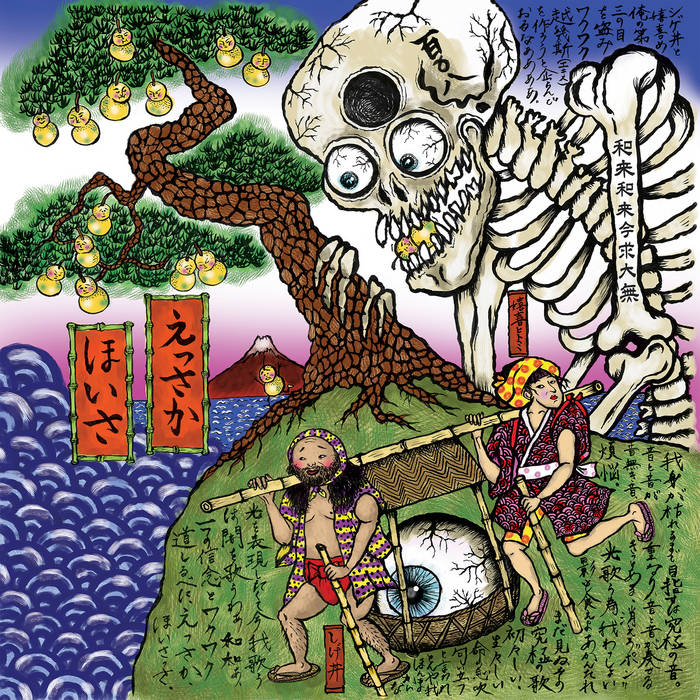 and it works, too! Favorite track: Warg.

jaguaraufpirsch It inspires me for own stuff and gives me lots of power!

Zontar the Thing in Swissvale

Uniquely omnivorous in their approach, WaqWaq Kingdom’s endless range of stylistic adventures sees them draw lines between traditional Japanese and contemporary electronic, between Jamaican dancehall and 8-bit techno, between African polyrhythms and experimental music, with plenty more helping to colour a powerful, vibrant palette. This new record - after 2017’s debut Shinsekai - is the first under the new line-up of Hitomi and Ishihara, as former drummer Andrea Belfi leaves the band for his own projects. This shift in personnel and dynamic has allowed Hitomi’s vocal delivery and Ishihara’s production to explore even deeper new ground, borrowing infinitesimally small snippets of sound and style to craft a singular hotpot of musics. From opener “Mum Tells Me” (written after Kiki sadly lost both her parents in a short period of time) and its Shinto bells and Afro-trap percussion, to “Itakadakimasu” and its reproach of human greed via twisted Cubo-Cumbia beats, Essaka Hoisa rarely stays in one place at a time.

Conceptually, Essaka Hoisa draws influence and imagery from traditional Japanese history and mythology. The title is taken from the cry of kago carriers - seen as Kiki and Shige on Kiki’s illustration for the record sleeve - two people carrying ruling-class or religious dignitaries over great distances. The shout Essaka Hoisa was said to lift the carriers’ spirits and strengthen their unity. In her lyrics, Kiki uses this imagery to explore our own reflective burden - experiencing life without an understanding of its meaning. Carrying hardship, sadness, pain and difficulty like a kago carrier, shouting essaka hoisa to get through the struggle. “We keep on going and shouting Essaka Hoisa together with partners, our kin, friends and people that we walk together and carrying on our life with laughter and tears,” Kiki writes. “No matter what, I am carrying on my life. I won’t give up and keep on going, keep on making, keep on learning with hollering the word Essaka Hoisa.”

Shigeru Ishihara - aka DJ Scotch Egg - has been a distinctive alien orbiting the dance music galaxy for over a decade, releasing radiantly unpredictable solo records through Lightning Bolt’s Load Records, as a member of Warp Records’ legendary Seefeel, and performing with both projects across the world. Kiki Hitomi is a member of Ninja Tune / Hyperdub’s King Midas Sound (along with The Bug and Roger Robinson), and co-founded iconic Japanese dubstep-noise duo Dokkebi Q. She is also a celebrated illustrator and designer, having created artwork for countless record sleeves and brands. The combined interests, abilities and creative scope of the two musicians - both Japanese, both based in Germany - results in Essaka Hoisa, a brilliant explosion of noise that speaks volumes to their musical powers.

Essaka Hoisa is released worldwide by Phantom Limb in November 2019 on coloured vinyl and all digital formats.