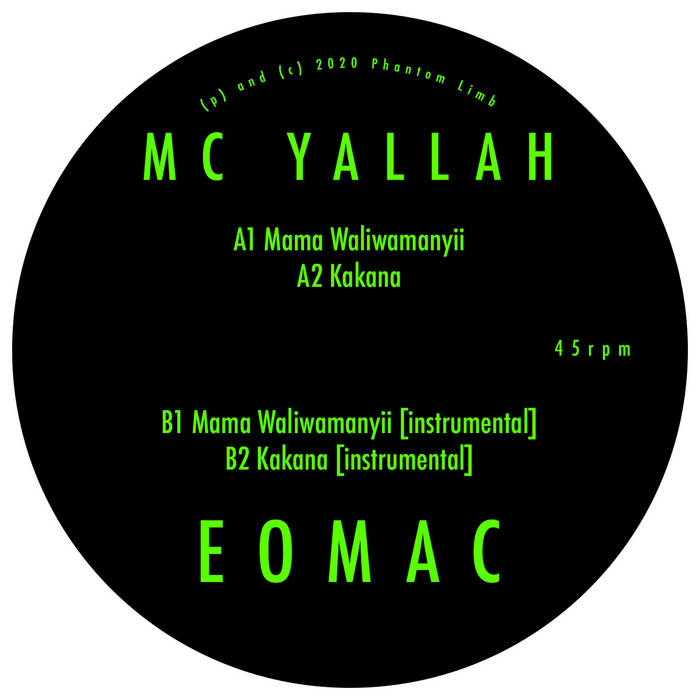 babysugarbag Both songs are great, with and without vocals. Favorite track: Mama Waliwamanyii.

he rr ast i

Formed remotely between Dublin and Kampala, Mama Wailwamanyii represents several months of work, sending beats, loops and song-stems back and forth until the results boiled down to the two vital cuts of exhilarating, experimental, unpredictable hip-hop that make up the EP.

Opening with urgent descending synth lines, ‘Mama Waliwamanyii’ rushes Yallah’s rhythmic vocal style to the forefront, bristling with kinetic energy. The song references her mother - its title translates to “Mama, you were strong” - and a sense of fierce, feminine intensity pervades throughout, a deep personal meaning that kicks as hard as the beats. The track is destined to intoxicate dancefloors across the world, perfectly sculpted by Eomac to rise and fall with breathless ecstasy one moment and send the heart racing with expectation the next. Yallah wrote the track after losing her mother, who raised her and her siblings alone following their escape from the domestic violence of their home life in Kenya. She writes that the studio session evoked floods of tears. That raw, expressive power shines through.

MC Yallah is Kenyan by heritage, but born and raised in Kampala, where she is a key member of the much-celebrated Nyege Nyege crew. Her debut release - a collaboration with French producer Debmaster - surfaced in 2018 on Nyege’s Hakuna Kulala imprint. Björk recently picked up on the Yallah phenomenon, spinning her tracks in DJ sets and mixes.

Eomac (Dublin-based producer Ian McDonnell) is one half of Phantom Limb favourites Lakker, whose pitch-black avant-techno graces both dancefloors and experimental music venues the world over. His solo records - including the vital 2016 album Bedouin Trax LP of Middle Eastern samples, released on the UAE’s Bedouin Records - are favourites of Phantom Limb’s A&R team.